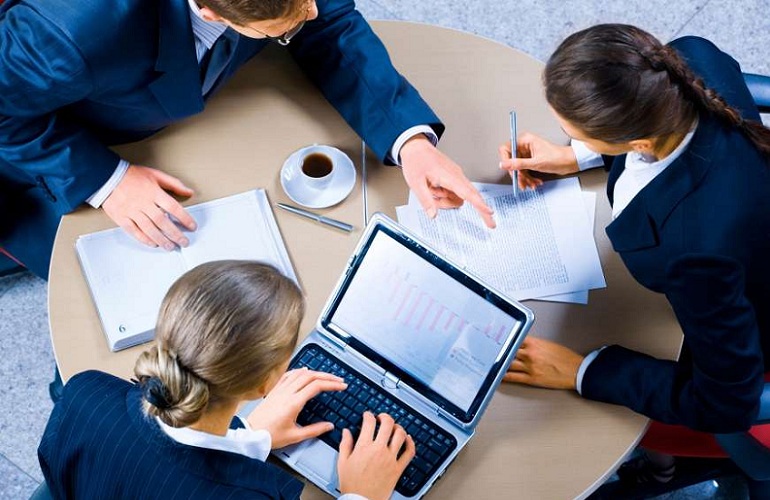 As every other country, Canada has its formal code of essence in the workplace. Canadians are known to be rather liberal, where various types of behavior will be accepted yet the range depends widely on the type of workplace and its individual peculiarities. Nevertheless, there are some ground rules.

In Canada, shaking hands would be the first thing you do upon being introduced to someone. As you are gently shaking his/her hand you tell the person you are being introduced to your name, and commonly you share your occupation/position. With the people you see regularly inside and around the office, you just simply bow and share a ‘Good morning/afternoon’.

Canadians are rather flexible thus you can call everyone by their first name, right after you’ve met them. Of course right before you’ve met the person you might as well refer to them as Ms. or Mr. as manners require, and you will notice that they are the ones who will require addressing them by their first names. However, when exchanging emails, you always address your correspondent as Mr. or Ms.

If you are dealing with professionals, such as doctors, lawyers, or professors you might want to refer to them by their last name accompanied by a Mr. or Ms.

You can’t start a conversation without a small talk of some sort. It is commonly everyday matters as weather, sports or some type of entertainment that initiate a conversation between two strangers, even at the workplace.

Personal matters, such as religious beliefs, politics or earnings are not really appropriate for a first time discussion.

Interruption as well as the lack of attention towards the colleague speaking is a universal lack of manners, not appreciated in Canada as well.

Body language is one of the first impressions that stays imprinted in people’s minds, which makes it very important when meeting new people.

Making eye contact is essential if you want to leave the impression that you are interested for the acquaintanceship to continue further. Looking away might strike the other person as lack of interest and boredom so they will just move away.

Upon meeting someone and also in general try not to be in somebody’s face while having a conversation, it’s rude and offensive.  Canadians do appreciate having their persona space intact.

Punctuality is no courtesy but rather a must in the Canadian workplace culture. In case you don’t arrive in time, the person or group expecting you will get the impression of disrespect and lack of professionalism. In case of an emergency of course it’s acceptable to call and inform the co-workers of the delay, cancel or if it’s possible to reschedule the meeting.

Also, once you’ve started working you have to arrive prior to your shift starting to be prepared for it.

Canadians praise team work, as a precursor to all time success. Mutual respect and understanding between coworkers as well as brainstorming and sharing ideas is considered the key to progress and innovation, and just as important as sharing the responsibility for better or for worse.

Conflicts at the workplace shall be avoided just like plague. In your workplace you have to be tolerant and attentive towards the others.

The dress code in Canada varies between employers. It is important to ask your employer what the dress code is and follow the code.

Work in Canada While Studying

For many decades Canada has been attracting thousands of international students into its higher educational institutions by also offering them possibilities of working part-time. For those who...
Job Opportunities

Canada is rather forthcoming when it comes to its international students. For those who are entirely focused in their studies, there are some small...
Job Opportunities

Once you have completed you education in Canada and choose to continue living and working there, many doors open to your boosting career. Several...